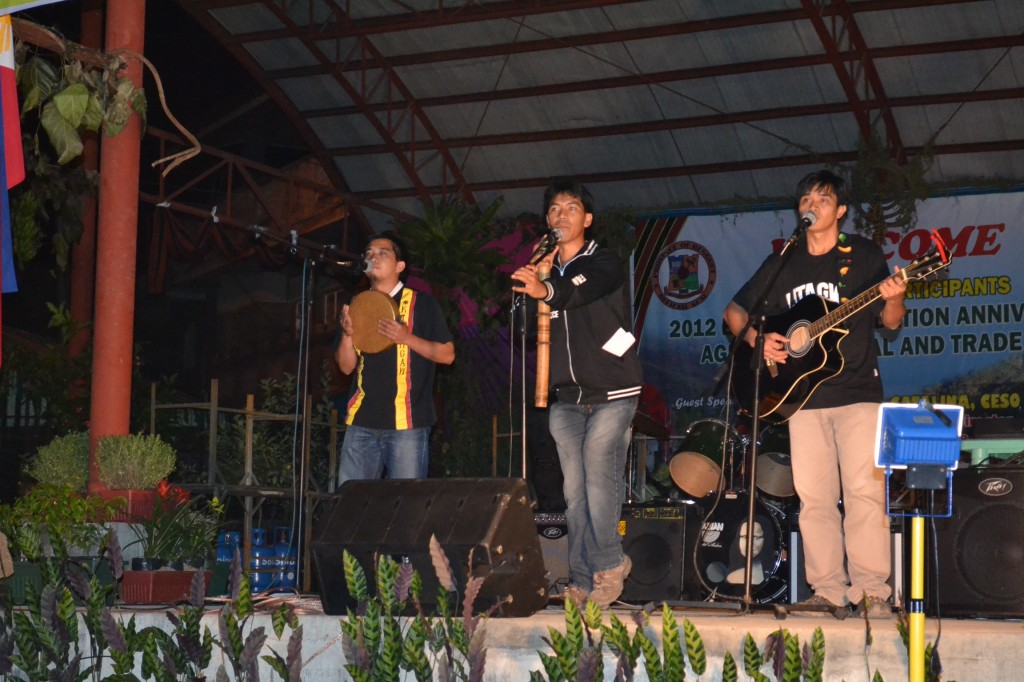 “Entako et aywanan bindisyon en kabunyan, kaiw ay naputuan entako et sukatan. San ginawang entako et pay linisan ta san ginawang siged si pan-amsan (So then, let’s protect the blessing of God. Let’s replace all the trees that were cut. Clean our river in unity that we can even swim in here with dignity)” is the message imparted by the winning composition entitled “Adawag di kalutaan (Plead of Our Mother Earth) of the Litagwa Band from Kibungan.

The Jaime V. Ongpin Foundation, Inc successfully conducted its environmental and cultural song competition in coordination with the Benguet Province’s celebration of ADIVAY last November 19, 2012 at the Benguet Sports Complex, Wangal, La Trinidad, Benguet. Having a theme of “Awit Para Sa Kalikasan: Biyayang Bigay ng Diyos, Ingatan para sa Kinabukasan”, the contest was participated by performers/ bands from the Municipalities covered by the “Saving the Benguet Watersheds for Water” project implemented by  the Jaime V. Ongpin Foundation, Inc. (JVOFI) and funded by the European Union.

The main objective of the contest was to produce an originally composed local cultural song which will highlight indigenous knowledge on environment protection. The winning compositions will be used as background music for the production of information, education, communication materials that will help increase awareness on the rich culture and environment of Benguet.

Performers from the municipalities of Kibungan, Sablan, Tublay, Bokod and Buguias competed in this acoustic and cultural instrument accompaniment musical competition. Bands were given the chance to render their original compositions using local dialects of Benguet, such as Kankana-ey, Ibaloi, or Kalanguya. Native instruments such as gongs, bamboo rain maker, kalaleng and other bamboo musical instruments evoked images of lush mountains and streaming rivers that are characteristic of Benguet province.

Epifanio Macario Jr. of Litagwa Band said that they decided to join the contest to make a difference. They got interested in it because it concentrated on taking good care of Mother Earth. “We would like to open the minds of our listeners through music to express that the environment, the water, the trees, the animals and the plants are very important to us, that we should take good care of it and we should love it” Macario added.

On the other hand, Joven Diwas of PBSAI Band said that they were inspired to join the contest because they want to express their concern regarding the environment’s depreciation due to human abuse and insensitivity.

Part of the competition was online voting for a special award of “Most Liked Band”.  The online voting started on November 9, 2012 and ended on November 19, 2012, Monday at exactly 12 noon. Based on the results, the Litagwa Band and Soul Hunters Band tied at first place with 781 votes, followed on second place by Musicare Band with 478 votes, PBSAI Band with 123 votes and Laylay-os Di Igolot Band with 45 votes.

This activity which was joined by Governor Nestor Fongwan, Mayor Benito Siadto of Kibungan, project partners and Local Government Units of the project sites was also attended by the youth, children and a large audience visiting the Adivay Trade Fair. This contest sent mind opening environmental messages that communicated the bond between the community, people and the environment. By using the winning songs in advocacy materials, the project hopes to help the local populace identify with the songs and spur them to act.

Please verify any request for donations with us.